the collection of Bolaffi Arte multiples, made by the major artists of the '900 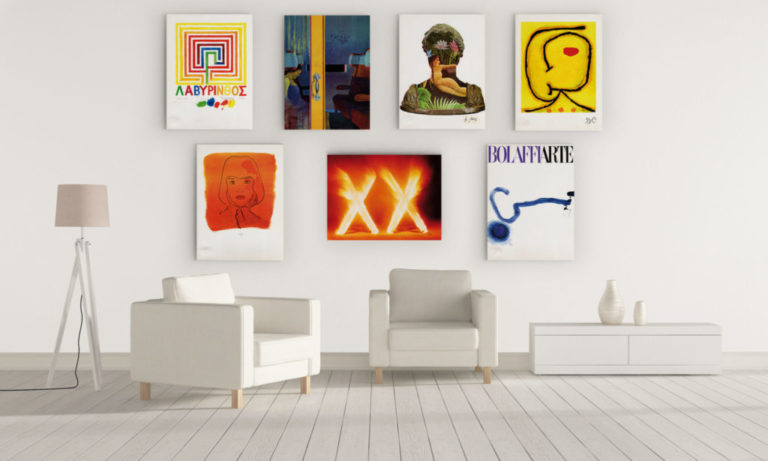 In the early 60s, the magazine BolaffiArte, born from a joint venture between the publisher Bolaffi and the publisher Giorgio Mondadori, who had the brilliant intuition of entrusting the production of each of its covers to an artist. A hundred or more painters and sculptors from different schools and cartels all over the world joined the kermis. From de Chirico to Warhol, from Mirò to Schifano, from Marini to Beujs to Moore to Manzù to many others, without placing superfluous distinctions between figurative, informal, abstract, conceptual or pop, created a own work that the publisher used for the magazine and that Bolaffi assembled in a unique and unrepeatable print, signed and numbered.

The covers signed by BolaffiArte, as pieces of a whole mosaic, draw whoever and whatever produced the twentieth century in the field of visual art. Moreover, each of them bore a sign, a story, linked to the artist’s life or to the historical moment. And, with regard to history, it is worth recalling the events of Jiri Kolàr’s work. The Czechoslovak authorities, during the cold war, did not allow the tables to be signed and sent to Kolàr. After a long stay at the Prague customs offices, the photolithographs were returned to the sender. Then the artist sent by post all his signatures that the publisher could eventually  apply at the bottom of each table. That was emblematic of the historical moment, considering that each table, with no exception, carries a story that can be told to those who want to listen to it.

The magazine proposed the themes to be developed: the Alphabet, the Arabic Numbers, the signs of the Zodiac, the Muses, the seeds and the figures of the Playing Cards, the Deadly Sins, the Liberal Arts, the colors of the Iris, the five Senses and the sense of business, the free theme.

The techniques used were: photolithography, screen printing, relief and, in some original cases, collage as well. The “Collages” by Aldo Mondino, in fact, do not carry any numbering system as they are all different and, therefore, are unique sample. The printing, always at the highest level, treated in detail, from four to nine and more colors. Only in very rare cases, the “Covers” show, in place of the signature, the “cachet d’atelier” sometimes supported by a notary stamp.

To the readers and collectors the future of this story.