Enrico Baj: play and fantasy against the power - Marotta Editori 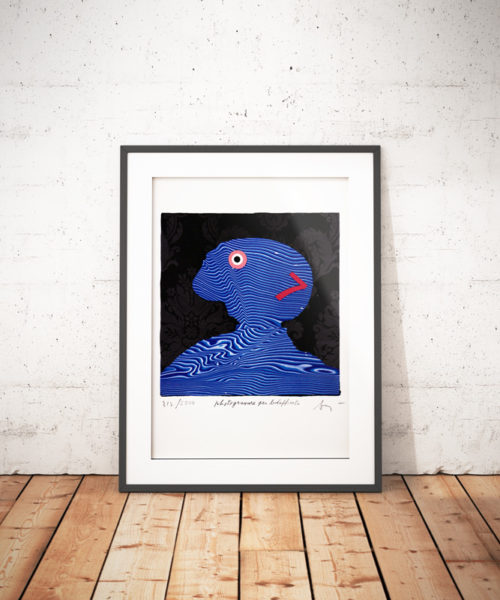 Enrico Baj: play and fantasy against the power

Desecrating , entertaining, able to instill irony and sarcasm even into the most politically involved works: it’s Enrico Baj. One of the masters who gave a new facet to the italian art of the postwar.

Baj was born in Milan in 1924 from two engineers with his mother being one of the first women to get graduated at the Politecnico Institute.  He develops an interest in art since a very young age. After the war and a first attempt to graduate in medicine, he enrols in the Academy of  Brera, then as a student-at-law, he becomes a laywer.

He doesn’t leave painting that soon he converts it into his main activity. In 1951 Baj founds, along with Sergio Dangelo the Mouvement of Nuclear Painting. These are the coldwar years so that the reference to the atomic conflict appears to be looming. Therefore, it acknoledges the manifesto a sense of belonging to contemporaneity which is full of distress and hope at once. 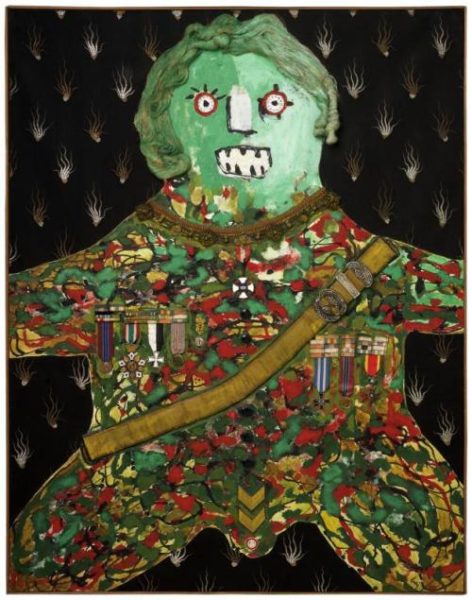 Always been in contact with international literates, intellectuals and artists, in the ’50s, Baj gets interested in those groups (among Belgium, Holland and Denmark), which integrate into surrealism. Such as Surréalisme révolutionaire and CoBRA, or groups nspired by dada and informal suggestions.

In 1953 Baj founds, together with Asger Jorn the International Mouvement for an imaginist Bauhaus, opposed to the New Bauhaus of Max Bill, and experiments his first multi-material collages. Fabric, cotton wool, glasses, which gave his painting a new direction. To this period, it belongs Mountains, canvas upon which varnish colloids full of color are applied. Also, Against style, endorsed by personalities such as Piero Manzoni, Arman and Yves Klein.

At the end of the decade, Baj publishes the Manifeste de Naples, which aims to launch the artistic avant-garde of the South, as in the Group 58. It gets together Lucio Del Pezzo, Luca (Luigi Castellano), Mario Persico. It belongs to this period Generals and the Lady, a series born from a fierce and sarcastic criticism against the power. In this video, the critics Luciano Caprile tells about their origin during the Enrico Baj exhibition from the matter to the 2010 figure.

His interest focuses on the mechanization and dehumanization of the society. Paintings-objects in which the characters are made of Lego little bricks and sculptures made out of Meccano pieces.

His desecrating attitude influenced even the sacred monsters of the artistic avant-garde such as Picasso. Baj would pay tribute to him through the farce of  Les demoiselles d’Avignon and of Guernica with his ” d’après” (1969). To Seurat, Baj would dedicate the series Chez Seurat, in which La grande jatte becomes the simbol of a immobilized middle class.

In 1972 he produces his first work of news report and denunciation: the collage of I funerali dell’anarchico Pinelli. Made out of crambling objects such as  ribbons, cordons, clutters and bows, it symbilizes the anarchic railoader’s fall to the ground. It was inspired by I Funerali dell’Anarchico Galli by Carrà for its title. It will be exhibited in Milan only in 2000: its presentation to the audience was canceled due to public order reasons. Calabresi, chief of the police, got killed that same day.

Among the artworks inspired to the political situation it figures: Nixon Parade and Berluskaiser. The former represents Nixon and Kissinger at the parade for the Columbus Day from a grotesque point of view. The latter represents Silvio Berlusconi’s conquer of the power with the elections in 1994.

At the end of the ’70s, Baj produced one of hi most arduous works: the Apocalipse, a collage developed on over 60 metres lenght for 4 metres height. It was composed by canvas, painted with an informal technique, and contours either painted or engraved into the wood. 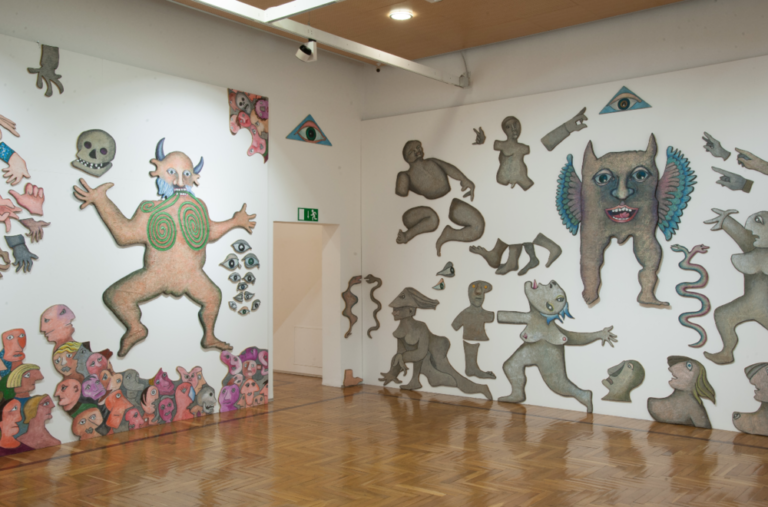 The decline of the contemporary society, the subjugation to science and the myth of modernity are represented through an ascensional path which reminds of Dante’s circles. The work will be handled until 2003, with the integration of contours and canvas (1983) and Gilgamesh‘s stories (1999 – 2003).

The critic to contemporaneity, to man’s automation and consumerism is the main subject of the ’80s, while in the ’90s the works like Tribal masks, Felts and the Totem disappear.

Baj’s last work, concluded few days before his death, is the The wall of Pontedera, which was produced later with the contribution of the architect Alberto Bartalini (2005).

Along the hundred metres of the mosaic, extending on the railway line of the town, the master puts his spiritual will. Enrico Baj died in Vergiate on june 16th 2003. Since 2014, the modern and contemporary art Museum of Trento and Rovereto (MART) hosts part of the Baj’s Archive and personal library.

For Bolaffi he produced the Number 7 cover of the series The Arabic Numbers.