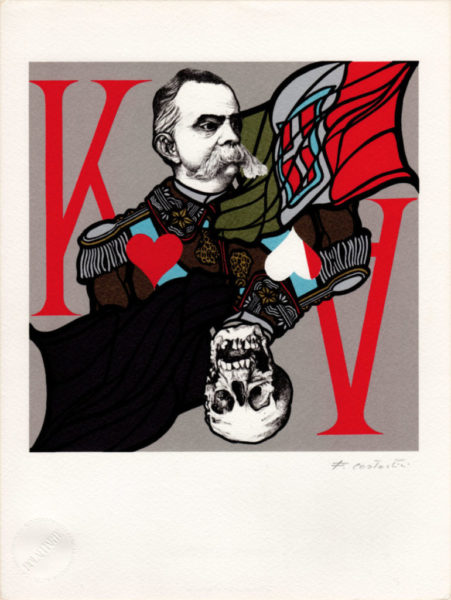 Self-taught, multifaceted, reluctant to the logics of art, totally against the sense of belonging to one movement or style, Flavio Costantini has gone through the 18th century exploring the history and the inevitability of the events.

Flavio Costantini was born in Rome in 1926. He becomes Sea Captain and works in the navy as second lieutenant. Then, he will switch to the merchant ship getting passionate in literature. In particular, he will illustrate Franz Kafka, and his America and The process.
Once he went ashore, in 1954, he could dedicate to activities that let him probe his passion for creativity. Costantini indeed projects and draws fabrics in Santa Margherita Ligure, then collaborates with the graphic Firma di Genova, with the business magazines of Shell and Esso, and Italsider too.

He nurtures his interest in painting and literature: in 1959, after a trip to Spain, he makes a number of paintings about Bullfighting. Some years later, as in 1963 onwards, thanks to an experience in the Soviet Union, he will devote himself to the study of international libertarian movement. According to this, in his paints he represents highlights of the anarchic movement between 1878 and 1926. To do this, he remains true to the documentary sources that will become a landmark of his production. 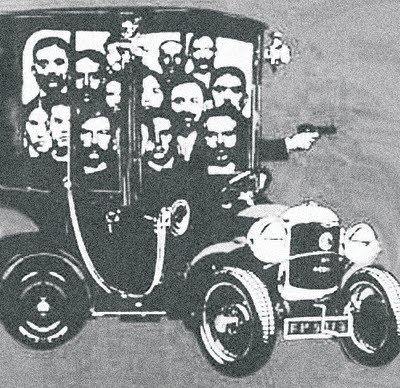 From the ’80s, Costantini’s research is geared towards the inevitability in history and its effects. That fine line which links victims and perpetrators and the fortuity of historical events, rolling over a single individual.

So that he gives birth to a series of paintings dedicated to the tragic ending of the Romanov family, Titanic sinking and later on to the French Revolution.

He never abandons his love for literature, witnessed by numerous portraits dedicated to writers and poets. But also ilustrations produced in volums such as  The fire horse by Vladimir Majakovskij (1969; reprinted 2006), Heart by Edmondo De Amicis (1977), The shadow line by Joseph Conrad (1989), Memories from the underground by Fëdor Dostoevskij (1997). Furthermore, portraits for national newspapers such as La Domenica del Corriere, Corriere della Sera, La Repubblica, L’Europeo, Panorama e L’Espresso.

Selftaught, this artist develops a very personal language and strives to identify in a movement or a codified style. Although he does not engage in abstraction, he denies figuration through irregular proportions and warped perspectives.  He outlines figures and architectures by means of a unique black strokes a fine grid of shadows. Thanks to this, he remains true to literary and iconographic sources he gets inspired by. 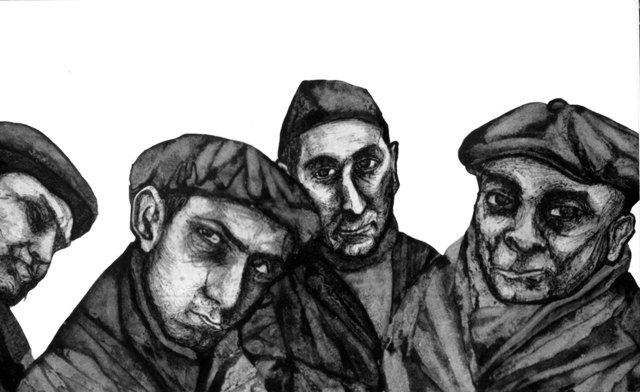 Flavio Costantini, First day of work for the Italsider magazine – Illustrations of the omonimus novel in the magazine, Source: Flickr

He dies in Genova in 2013. The Archive of Flavio Costantini, is born few years before (2011) thanks to the initiative of his family and friends. It aims to encourage, foster, saveguard and spread the knowledge of his works and research.

For Bolaffi  he mades  The King in the series of the Playing Cards.