Fluxus: everything is art and everybody can make it - Marotta Editori

Fluxus: everything is art and everybody can make it

5 March 2018 Posted by blog Art History Pills, Pillole di Storia dell’Arte 0 thoughts on “Fluxus: everything is art and everybody can make it”

Fluxus is among the most provocative avant-garde movements of the postwar. It featured a quite rebellious attitude against art market and artwork traditional idea. It defines itself as a non- movement  and more clearly an attitude against art and life. This movement, indeed aimed at creating a whole artwork, integrating artistic production and daily life. Its multidisciplinary nature along with those several souls which animated it make Fluxus a fundamental moment within the art revolution of the twentieth century.

Fluxus was officially born in 1962, with the Fluxus Internationale Festspiele Neuester Musik (Fluxus International Festival of the Newest Music) at Wiesbaden, making its debut with a number of actions taken by some of the most influent members of the group, such as: George Maciunas, Dick Higgins, Emmett Williams, Ay-O, Robert Filliou, Nam June Paik, Daniel Spoerri, Wolf Vostell, Giuseppe Chiari, Gianni Emilio Simonetti and many more. 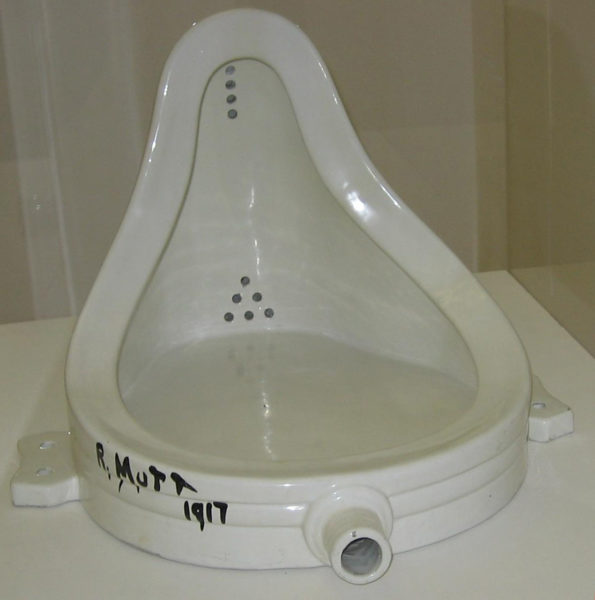 However, it is deeply rooted in Dadaism, Futurism and Surrealism, in the musical experimentations of the American musician and compositor John Cage, in anti-art of Marcel Duchamp and most of all in the theoretic contributions of the Lituan-American charismatic architect George Maciunas.
After the Second World War, He moved to New York,  where he came in contact with a group of artists and musicians that swung aroung John Cage (in the following video, he performed Water Walk on the popular TV show I’ve Got A Secret , introduced by Gary Moore). He also got in touch with the young musician La Monte Young, who will go down in history as the first minimalist compositor. Maciunas opened on the Madison Avenue the AG Art Gallery to exhibit his works and those ones of Dick Higgns, Yoko Ono, Jonas Mekas, Ray Johnson.  He made it in time before moving to Wiesbaden (which was the West Germany at the time) where in 1961 He found a job as graphic designer for the US Air Force.

In the early ’60s, in West Europe, the promotional activity of Fluxus  was led by Maciunas and some other members of the group such as Higgins and Knowles. There were organized concerts with ancient musical instruments and several Fluxfests.
Back to New York in 1963, Maciunas set up street concerts to escape cultural traditional spots, seen as a form of mummification. He also opened a shop in Manhattan, the Fluxhall  in which he sold Fluxus multiples and hosted artistic happenings. 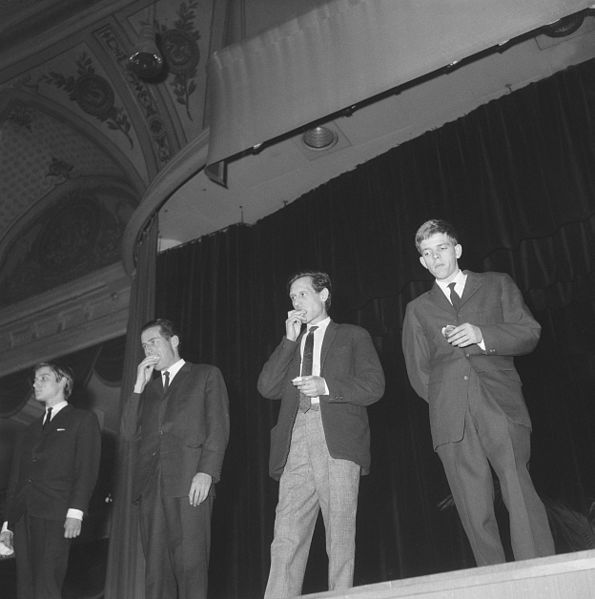 As a consequence of the internal divisions, and due to the political stances taken by the founder and some members of the group, the movement broke down and many costitutents distanced themselves from it. Meanwhile, Maciunas creates several real estate cooperatives in Soho, making the area a shelter for artists. Crumbling buildings were indeed converted into hospitable attics and environments, whose expenses were handled equally. 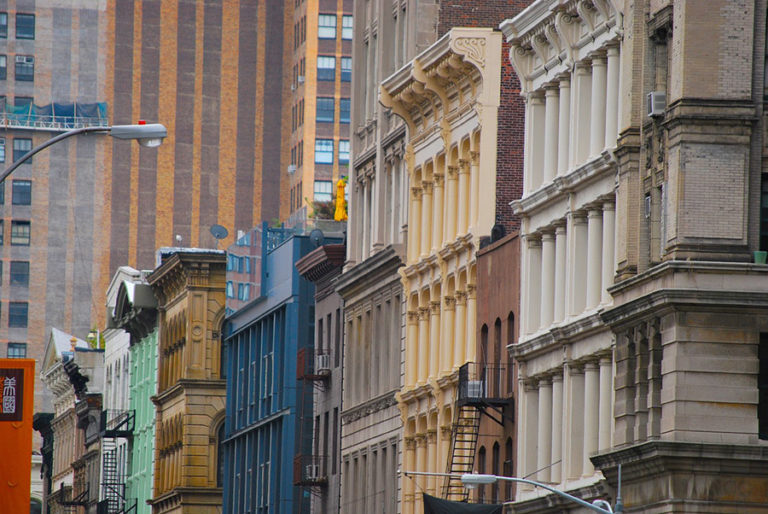 The area of Soho nowadays

Between 1969 and 1970, he tried to put a 60 members cooperative together on the little Ginger Island, in the british Vergin Islands, allocating 11 acres to a Fluxus colony. However, the landlord died the day before the sign of the sale agreement. Some years later, he tried again in the Massachusetts countryside, but his health conditions pushed him to leave to New York where he died of cancer on May 9th 1979.

The revolutionary nature of Fluxus

More than a movement, seen in its most traditional meaning, Fluxus is a multidisciplinary group of artists linked by the attempt to blend socio-cultural and political renewal into one single front for action. Therefore, it claims the artistic tension coming from the most ordinary actions and attitudes to produce something verging on the everyday life “flow”. 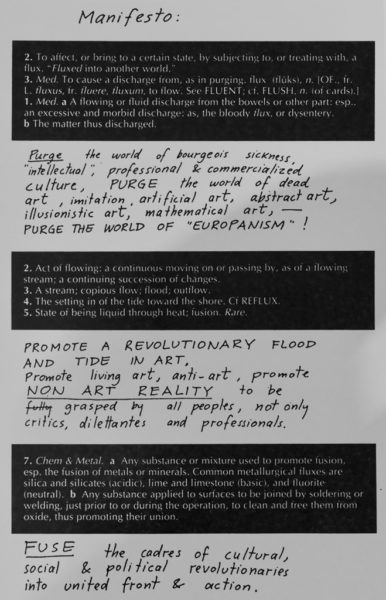 It owes its name to Maciunas himself, who named it within a brochure that handed out to the audience during some music conference at the beginning of the ’60s. In 1963 Maciunas signed the Fluxus Manifesto and in 1964 h published the first number of CCV tre, the official magazine, which managed along with George Brecht.

Fluxus contribution to the world of art is not just essential. It is throughout the movement that some key concepts born or emerge for the development of several disciplines. Such as Intermedia, word used by Dick Higgins to describe the multidisciplinary artistic activities of the group which was impossible to put into a single category. An example of this is given by the two categories, visual poetry and the art performance that are linked to the concept of Intermedia. The following video shows the Yoko Ono reknown Cut piece, performed on march 21st 1965 at Carnegie Recital Hall in New York.

Another keyword of Fluxus is Happening. It deals with an integral form of art included in a widest consideration about the denial of the artistic object to support its process of creation.

Despite the fact that some previous forms of art may already be associated to dadaism or surrealism, the Happening was born in 1959. Thanks to Allan Kaprow the “exhibition”, Eighteen happenings in six parts, consist of a number of actions involving the audience and the surrounding environment. The event, described by Kaprow in the catalogue, appears just as it has been thought and developed. The expected actions take place in three different environments, each one characterized by its own enlightment: white and blue in the first one, white and red in the second one, blue in the third one. Within the environments the are some objects, collages and a number of seats between 75 and 100.

The audience gets numbered cards upon which it has to change seat in order to attend some actions called happenings. These take place once over an hour and a half and could be, watching a slide projection, listening to improvised music, looking at some artists while painting hanging canvas or playing instruments, a woman squeezing oranges or another naked sinking in a sofa. Therefore, the structure appears simple: the Happening is comprised of the combination of casuality, involvement of the audience, predicted actions and improvisation.

The Fluxkit, instead, are objects, as in multiple productions and they are sold under the collective name of Fluxus . It concerns books and multiples produced – formerly- by Maciunas in collaboration with the artists of the group. Among the first ones to be marketed, it features Composition 1961 by La Monte Young and Water Yam by George Brecht, a work formed by a cardbox including printed drawings on small paper sheets.

Characterised by economy and series production, the Fluxkits benefit from a wide diffusion and deserve the credit of bringing art and its documentation out of common places and the art system, as it is generally meant.