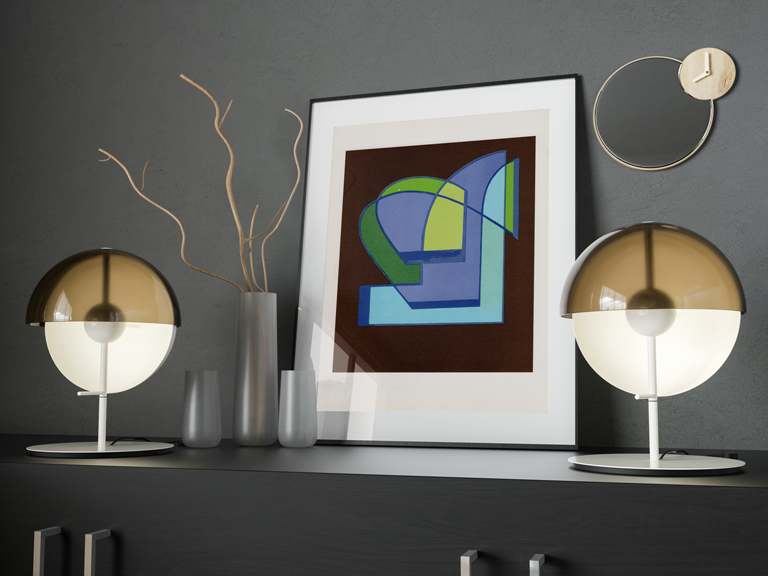 Mario Radice: the vanguard of abstraction

1 May 2020 Posted by blog Artists 0 thoughts on “Mario Radice: the vanguard of abstraction”

Painter, art critic, designer, curator, essayist: Mario Radice had a decisive role in the culture of the twentieth century and was among the first Italian abstract artists.

Born in Como in 1898, Mario Radice cultivated his passion for painting alongside his training: since 1912, while studying as a commercial expert and accountant, he takes private lessons from the painter Achille Zambelli and the sculptor Pietro Clerici and follows courses organized by the Institute pro popular culture and an association of painters and decorators. In 1916 he graduated and, two years later, his military service and his appointment as second lieutenant of artillery during the Great War brought him to Vienna, Poland and Albania.

Upon returning to Italy, after a period as an accounting clerk and an attempt to enroll at the University (abandoned in a short time) he began to work as a worker in a paper mill. Thanks to this experience, which allows him to thoroughly study the machinery and processes of paper production, he develops particularly advantageous processes and designs a machine that recycles sulfuric acid which he patents and exports to Argentina.

Meanwhile, he never stopped painting: in 1927 he made his debut as a painter participating in the exhibition organized in Como to commemorate the death of Alessandro Volta.

Following the Black Tuesday of 1929, which costs him a large part of his heritage, he returned to Italy and decided to devote himself entirely to painting.

The Como Group, the vanguard of abstract art research in Italy, was born in its first Como studio from the partnership with the painter Mario Rho and the young architect Giuseppe Terragni. Its aim is a full renewal of the arts and architecture which, by rejecting the Liberty style and the twentieth century, is the bearer of a great international opening.

In the following years, Radice traveled extensively in Italy and abroad and participated in numerous exhibitions and projects: Terragni’s “O” room at the Fascist Revolution Exhibition in the Palazzo delle Esposizioni in Rome (1932), the V Milan, and, in collaboration with the architect Luigi Zuccoli, the tomb of Mariella Testoni at the Monumental cemetery of Como and the one never made by the aviator Nino Rocco Invernizzi (both from 1934), and also the interiors of the Antonio Noseda library, of the headwear Marelli and Cappi upholstery in Como (1935).

In the same years (1932) he was one of the founders of the publishing company and Quadrante magazine, close to the Il Milione gallery (where he exhibited regularly from 1934 onwards). The editorial experience is certainly crucial for Radice, because the magazine hopes for an overview of architecture and figurative arts.

The “Casa del Fascio” and adherence to abstractionism

Nel febbraio del 1In February 1936 he received the official assignment to which his name is inextricably linked, or the decoration of the walls of the Casa del Fascio in Como, where he made frescoes and bas-reliefs.

The definitive passage to Abstractionism, announced in the 1933 oil painting entitled Partita di palla, is total and makes this work fundamental for the history of twentieth century art as the first Italian example of abstract art in a public building.

Far from rigid schematisms, the work inside the Casa del Fascio (now lost) seeks a visual order from which symbolic elements and references to Piet Mondrian and Dutch neoplasticism emerge. But above all it creates a continuous interaction between painting and architecture.

From the second half of the 1930s onwards he consolidated his abstract turn and was involved in numerous projects, from the construction of Fontana di Camerlata (Milan, 1936) destroyed then rebuilt in Como, to the exhibition at Villa Olmo (Como) of an important exhibition of modern art, which brings together – in the abstract works section – works by Fontana, Licini, Prampolini, Rho, Soldati and others. In 1938 he founded the group and the magazine Valori primordiali, collaborated in the foundation of the MAC – Concrete Art Movement and joined the futurist primordial group Sant’Elia. He also participated in the 1942 Venice Biennale in the pavilion of Italian futurism, ordered by Marinetti and at the 4th Rome Quadrennial (1943).

His works testify to an abstract art built on precise geometric relationships between color and plastic dynamism and through a harmonious and serene combination of geometric shapes.

In 1973 he received the Ambrogino d’Oro for artistic merit from the Municipality of Milan and in 1977 he held a large personal exhibition at the Promoter of fine arts in Turin. Among the latest exhibits is an anthological exhibition at Villa Malpensata, in Lugano in 1982, which brings together more than three hundred works.

His personal archive, on the other hand, was donated by his heirs to the Municipality of Como, which keeps it in the Civic Museums. His reference critic is Luciano Caramel.

For Bolaffi he created the zodiac sign of Taurus.