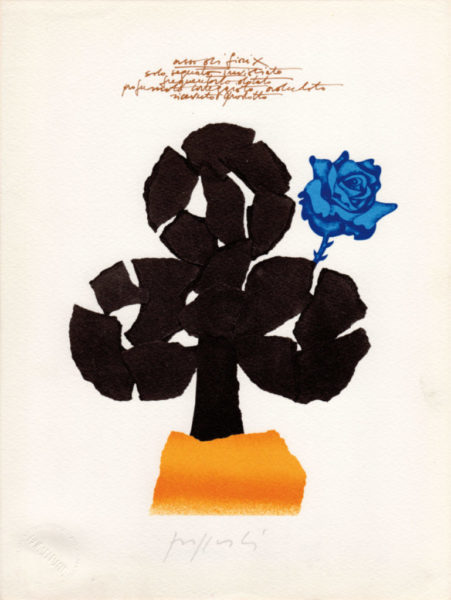 Concetto Pozzati, from informal to pop

28 May 2020 Posted by blog Artists, Carte da Gioco 0 thoughts on “Concetto Pozzati, from informal to pop”

Son (and nephew) of art, Concept Pozzati represented a bridge between the different currents of the second half of the twentieth century, from Informal to Surrealism, up to Pop Art.

Concept Pozzati was born in Vo ‘(in the province of Padua) in 1935 but completed his first studies in Bologna then, in 1955 he moved to Paris, to specialize as an advertising graphic designer, in the studio of his uncle Sepo, in turn a renowned artist and poster designer international.

Concetto Pozzati between France and Bologna

In the French capital he confronts the cultural climate of the time and knows some artists, including Osvaldo Licini. Tonato in Italy, he moved to Bologna, the city to which his name is inextricably linked, where he founded the Advertising Art School dedicated to his father, the artist Mario Pozzati.

In 1967 he began teaching at the Academy of Fine Arts in Urbino, which he later directed until 1973, then taught in those of Florence, Venice (which will be inherited by Emilio Vedova) and Bologna.

From 1993 to 1996 he was councilor for culture at the municipality of Bologna. Meanwhile, he became Academician of San Luca (1995) and in 1998 he was appointed artistic director of the Casa del Mantegna in Mantua. Over the years he has never abandoned the activity of curator of exhibitions, cultural events and publications.

From informal to pop art

Concept Pozzati made his debut in the fifties with a clearly informal inspired painting, but soon he turned towards figuration and comparison with Surrealism: his “ideal masters” Magritte and Giorgio De Chirico.

In the sixties he tightened a close relationship with English and American Pop Art, and it was among the artists present at the XXXII Venice Biennale that, in 1964, he consecrated American Pop art by assigning the Golden Lion to Robert Rauschenberg.

Compared to US colleagues, however, Concept Pozzati does not intend to celebrate the process or consumer goods, but to investigate the relationship between art and goods. His interpretation produces images with simplified figuration, in which cultured references and a subtle irony are recognized, combined with metaphysical and surreal apparitions of familiar objects or inspired by the art of the past.

He loved still life very much, which he always made with his unmistakable style, but he also juggled more dramatic compositions such as Torture (inspired by the Abu Ghraib facts) in which the painting is made up of degraded bodies, bandaged heads, dogs screaming and armed shadows, or the De-Positions of the 2000s, in which the bodies are “placed elsewhere” than their natural positions: skeletal hands, silohuettes hanged against the background of black bands that simulate crosses.

He also participates in other important international events and exhibits at the Tokyo Biennale (1963), the Paris Biennale (1969), Palazzo Grassi (1974), the Rome Quadrennial (1974) in the Museums of Bologna and Modena (1991). In 1996 one of his anthologies is housed in the Rocca Malatestiana in Fano and in Palazzo Lazzarini in Pesaro.

In 2002 he exhibited at the Art Curial Center of Contemporary Art in Montecarlo and at the Palazzo della Pilotta in Parma, in 2016 at Palazzo Montanari in his Bologna.

For Bolaffi he created Fiori from the series of Playing Cards and How to measure roses in the mountains.